The Boots and Hearts Music Festival has recently released their full 2019 line-up, and just like the previous seven editions, August 8-11 is already a front runner for weekend of the year. With the likes of Chase Rice, Michael Ray, Tim Hicks, Carly Pearce and Mitchell Tenpenny being added to the already epic existing line-up of Jason Aldean, Miranda Lambert, Maren Morris and Cole Swindell Boots and Hearts 2019 will certainly fail to disappoint.

This nomination identifies the previous success of Boots and Hearts and Republic Live on a global scale and I believe this is only the beginning. The festival creators and supporting team are of course honored and humbled by the industry’s recognition, and rightfully so, last summer’s edition of “Boots” was truly unforgettable. In addition to the festival’s staff yearlong preparation and commitment, I believe that this nomination will add fuel to the fire of what is the 2019 Boots and Hearts Music Festival.

Make sure to secure your 2019 Boots and Hearts tickets sooner than later, as this August weekend should not be missed. If 2018 was any indication I am truly excited to see how the festival will raise the bar for themselves again this year. 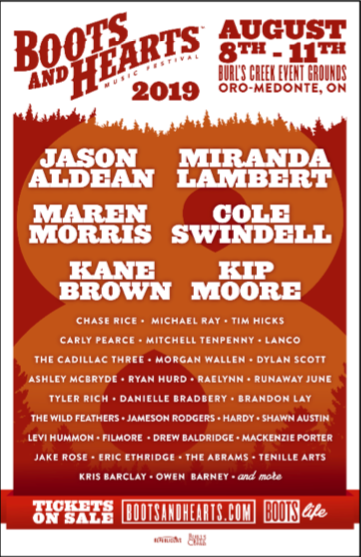