Ahhh, wrestling. Where boys become men. A sport where athleticism and theatrics unite. I’m sure everyone has watched at least one or two wrestling matches in their day. Remember the great ones such as Andre the Giant, Hulk Hogan, and Jake The Snake? I may be showing my age but hey, you get the picture. Either way, wrestling has a huge following, and that following lead to the creation of one of Barrie’s lesser known events. Yes, that’s right, Barrie Wrestling is a thing, and it’s every bit of excitement that you’d expect to come from this sport.

Atmosphere Medias got the chance to speak to several wrestlers, and here we are summarizing our interviews with the great Freddie Mercurio (who is everything you are imagining from his name), as well as the Barrie Wrestling champion Gabriel Fuerza.

Both wrestlers come from overseas, but travel over Ontario and Quebec, often times going to Ottawa, to perform in front of many fans. They even travel to the USA for events…as long as (the event organisers) are willing to pay that is. As Fuerza says, “we gotta make that money”.

For Fuerza, a native of Atizapan, Mexico, the 3 years he has been wrestling has become one of his full time jobs. He initially got into the sport because of the athleticism and theatrical components. What keeps him involved is being to play the crowd. “They’re like orchestra. You make them say what you want them to say, you make them cheer, you make them boo; you make them do whatever you want. You work them”, says Fuerza.

Mercurio, a 13 year wrestling veteran from the south coast of England, shared that sentiment. The icon that is Mercurio, for whom wrestling is his full time career, also added that what he loves about wrestling is that there are no rules. He has this to say, “there’s no rules. Well there’s ‘rules’, but there’s nothing to say you can’t jump from here, or do this with a little twist, or give a high five to someone in the audience. There’s no limitations. It’s how creative can you be. You going to have a dance off in the middle of your match? You don’t know. Is very unpredictable.”

Both of these athletes take their craft very seriously. Don’t get me wrong, they have fun, and a lot of it, but it’s something that is near and true to them. We at Atmosphere Medias had never actually been to these events before, but recommend it for a unique outing. Be sure to check out Barrie Wrestling’s upcoming events.

For anyone interested in Mercurio or Fuerza’s social media information: 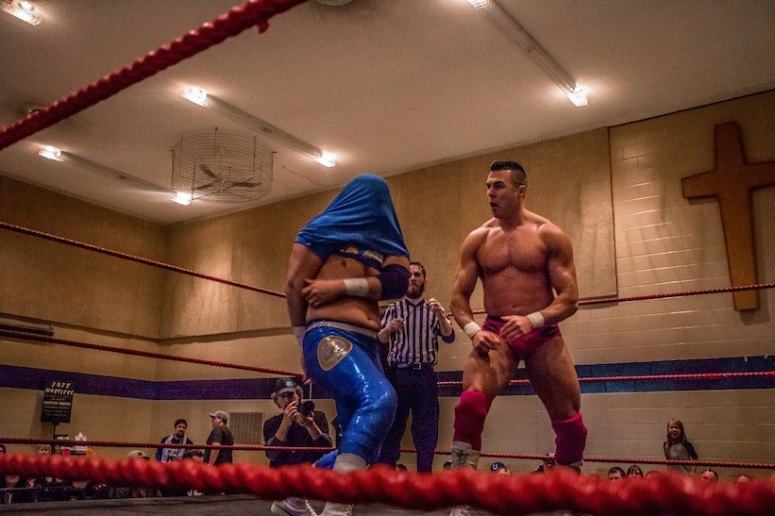